"Photographs are a collection of memories. When lined up they paint a visual landscape of time and legacy captured through generations of family celebrations and frozen moments. Our goal is to breathe life into your cherished heirloom images that will last generations. We take special care with each photograph as if it were our own family treasure."-JJ 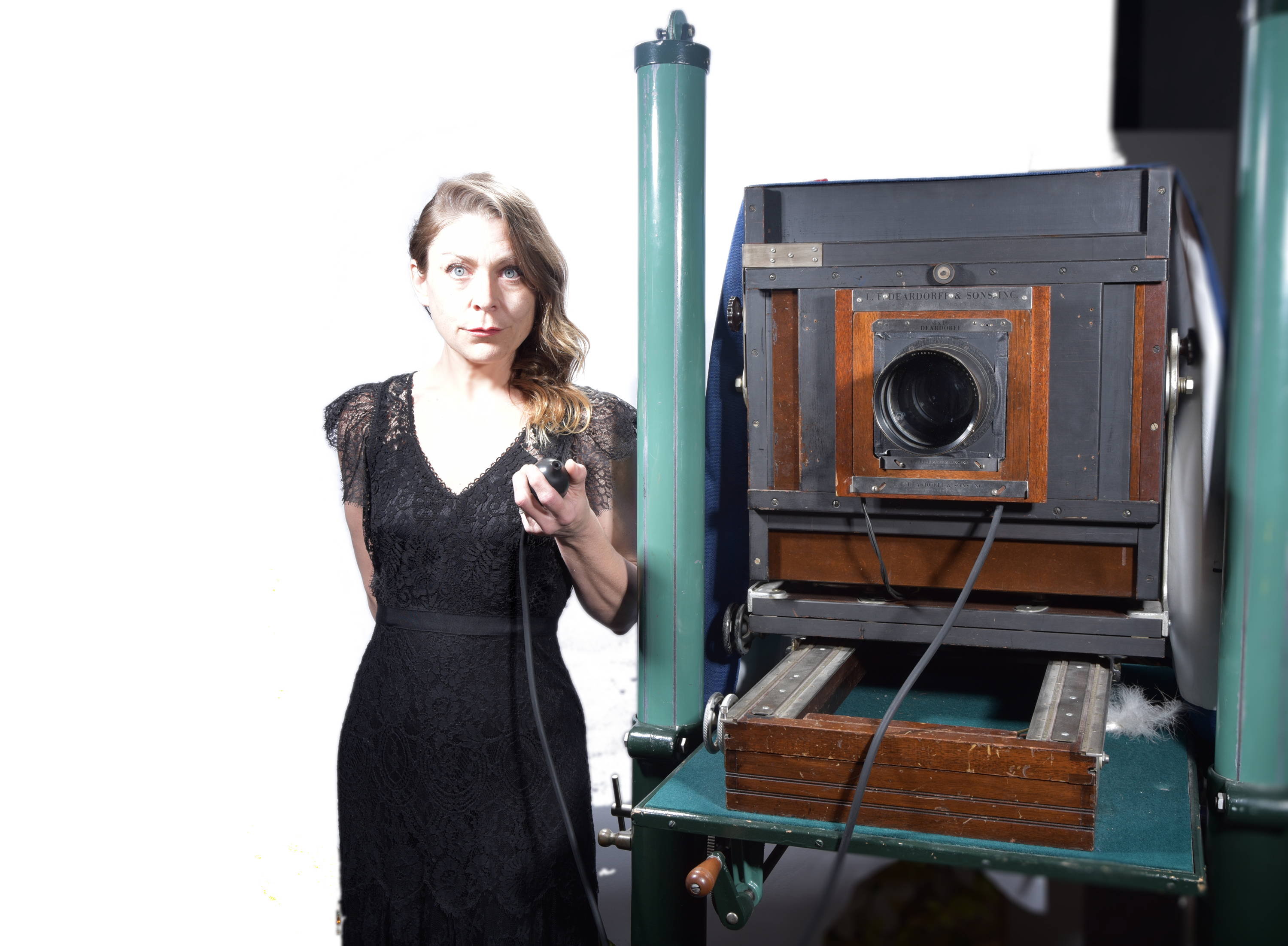 Our co-founder, Jen Jansen, seen here with her 11x14 Deardorff Studio Camera. Jen is not unlike the artisan maker of this camera, Laben Deardorff, who had a lifelong way of making the things that he needed. The Deardorff camera company was founded in Chicago in 1923, Laben worked repairing cameras for 30 years before founding his company. Both Jen and Simon have a similar 'make it yourself, nothing is impossible' philosophy and that is what inspired Digital Tintypes. Our goal is to create authentic heirloom tintype and ambrotypes that will last generations! We take the extra steps to expose each image with authentic film so that your newly created digital tintype or ambrotype is just as tack sharp, with as much silver rich detail as possible.

'Laben Deardorff, the camera’s designer, grew up in Ohio among the Dunkers, a sect not unlike the Amish, and some people see their influence in the elegant simplicity and fine craftsmanship of the Deardorff, with its bellows stretched across a polished mahogany and metal frame. It’s light compared to metal view cameras, and it folds into itself, becoming its own surprisingly compact case. Photographers must drape a dark hood over their heads to see the dim image projected on the camera’s ground glass, but the front and back move independently, allowing maximum control of perspective and focus; among other things, that control keeps the vertical lines of skyscrapers from receding to a point like railroad tracks when an architectural photographer takes their picture. The resulting images are remarkably rich in detail.

More than 10,000 folding Deardorffs were made, from portable 4-by-5s and 5-by-7s (the same cameras with different backs to hold the corresponding size of sheet film) to mammoth 11-by-14s and 12-by-20s, though most were 8-by-10s. Larger, nonfolding models also were made in much smaller numbers for institutions such as the Metropolitan Museum and the U.S. Army. Deardorffs were always the Cadillac of American view cameras. In 1947 a four-by-five went for $150, in 1982, $1,650.

For much of the 20th century Deardorffs were a mainstay of busy Chicago catalog photography studios such as Grignon, Kranzten, and Vogue-Wright, whose clients included Montgomery Ward and Sears, Roebuck. They were used by Ansel Adams, Richard Avedon, Art Sinsabaugh, and Yousuf Karsh, and they remain the tool of choice for fine-art photographers using large-format sheet film–especially landscape photographers, who appreciate their portability. Among those who use the cameras today are Sally Mann, Richard Misrach, and Hiroshi Sugimoto.'

Excerpt taken from Stephen Longmire's article in the Chicago Reader

Thank you for working with Digital Tintypes to preserve your family history and life's memorable events!

The brain child of Simon Mandel and Jen Jansen, Digital Tintypes was born out of a passion for testing the boundaries of what was possible in merging modern digital images and traditional photographic processes. Jen is the 'collodion queen' of the duo, a craftsman at a young age, Jen finds herself at home in the darkroom and behind the lens. If you visit the Chicagoland area, make sure to save some time for an in camera tintype sitting with Jen. It is an experience not to miss! Simon is the 'cyberguru' of the team and is the reason why clients from Australia to Amsterdam have been able to find us online.

Our service is the only one of it's kind in the world. Our processing is completely photographic to maintain the utmost quality of your cherished images. Jen's background in restoration and fine art printing has fueled our desire to maintain the authentic photographic processes needed to reproduce images of a quality that meets and often surpasses the original. We exclusively utilize silver gelatin film to expose the work in the traditional process. This process is a little slower, more meticulous, and more expensive, but it is worth it for those very special images you want to translate into something new.

We take great pride in providing the finest quality tintypes. No project is too big or too small! We treat each one of your photographs like a family heirloom. Thank you for visiting our site, we can't wait to help you make wet plate collodion tintypes and ambrotypes of your photographic history!